My journey with grey water began at time when I was doing a bit spear fishing around Sydney. We were mostly diving just outside the heads of Sydney Harbour, every so often though we’d head further afield up or down the coast. When we did the change in water visibility was immense.

Most of what goes into the sewer ultimately makes its way out to see via the ocean outfalls. The filtering is better than it used to be but it’s not remotely close to drinking water. I recall a passionate conversation with a Sydney Water executive who proudly told me that they send camera’s down to the outfalls and there areas a “teaming with life, the fish love it”, which got me thinking, the slums that are home to 1 billion people are also “teaming with life” but I’m pretty sure the inhabitants don’t “love it”. The fish are breathing a filtered version of leaves our kitchen sink, or baths, our laundries and the shit we flush down the loo.

It’s no wonder then the water visibility close to our major cities is so poor then. The number of fish and life in general below the surface suffers just as much.

The majority of what you put in the sewer is grey water. That’s waste from your bath/shower, laundry and kitchen waste – or everything except the waste water from your toilets (black water). This water can be safely filtered and used on-site to water your garden instead.

In most homes, the volume of grey water is comparable to or less than that which naturally lands on it in the form of rain. The land has more than adequate capacity to absorb this water and let it filter back into the earth. Keeping it onsite is a simple reliable way of reducing how much you contribute to the pollution of our coastal waterways. 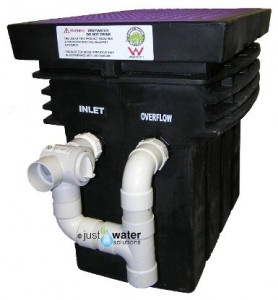 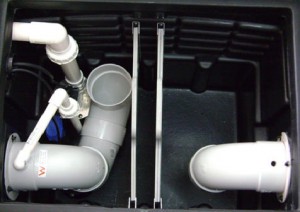