This is my experience in converting and owning a Golden Motor Magic Pie 3 electric bike kit. 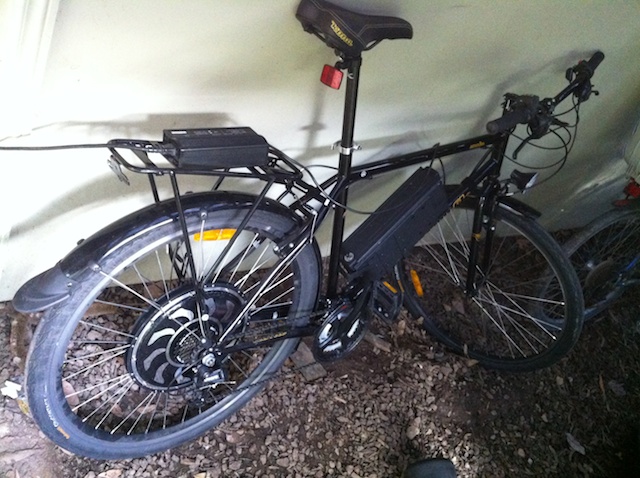 Why use an electric bike?

I have a regular push bike and I can ride to work. It’s a 30 minute ride and I need to shower before starting work having riden. We don’t have showers and 30 minutes isn’t enough exercise to justify the hassle.

On a 20km commute, no pedalling, with the following elevation profile I’m seeing 10-20% remaining battery capacity corresponding to a range of 22-25kms. I’m a 100 kg rider and the base bike weighs circa 12 kg. Note the profile below shows one direction only – 10kms. The elevation is displayed in feet, distances in Miles.

With light pedalling I’m finding perhaps 10-20% reduction in power use on this route.

A lighter rider and a flatter route will significantly increase range.

It’s important to note that the Golden Motor Magic Pie III has significant resistance, riding the bike once the battery is flat requires significantly more work than simply allowing for the additional weight associated with the hub motor/battery.

I’m averaging around 20Wh/km on the above commute. Using this as a guide you can calculate your required battery capacity.

Getting up hills without working is about maximum power output.

1000W is recommended if you want to climb hills without pedalling.

What is the legal limit?

In Australia the limits are currently 200W. 250W seems more common in other parts of the world. There are moves in Europe to introduce a 1000W power limit with a speed limit of 25km/hr.

For a higher power electric bike (circa 1000W) which is the focus of this guide a rear mounted motor is recommended.

On a 28inch/700c wheel the following speeds can be achieved on flat ground:

The maximum speed and acceleration can be configured on the Magic Pie 3 to limit maximum speed. A reduced maximum speed will have corresponding gains in range that can be achieved.
There is a real argument for limiting the top speed of the bike to that which you would otherwise be comfortable pedalling the bike at. Brakes, suspension and handling of push bikes were never designed for average speeds of 40km/hr!

I used double sided velcro loops to attach the wiring loom to the bike. Particularly whilst the bike is new and still being set up wiring will inevitably come on and off, velcro makes this easier than using cable ties.

Lights: Note – be very careful wiring the the front and rear lights supplied with the kit. The negative terminal of the rear light grounds to the frame, reversing the polarity will break one or both of the speed controller and motor controller.

The Golden Motor kits provide a rack for mounting the battery. It is easy to assemble and works.

If you’re using a front hub motor mounting the battery on the rear rack should provide for a reasonably even weight distribution.

There are two major problems with using the supplied rack battery mounting kit.

1. Mount point is too high.

The battery sits relatively high on the bike. This means that the center of gravity is high. The side effect is that if you’re manouverying the bike, in and out of a car, walking around obstacles, as soon as the bike leans away from vertical the weight of the battery wants to pull the bike over.

If you lower the mounting point on the battery on the bike you significantly reduce the tendency of the bike to want to fall over. This makes it easier to manage and easier to handle.

Note that this problem is very much about manouvering the bike, when you’re riding it the effect is not so noticeable.

2. All of your weight is over the rear wheel

With a rear hub motor both motor and battery sit rear of the seat. If you need to pick the bike up there are no easy points for lifting on the bike frame behind the top tube. Picking the bike up using the top tube leaves the back wheel firmly on the ground and the front wheel in the air.

Moving the battery forward into the triangle of the frame resolves his problem.

I fabricated simple brackets using aluminium. The mount attaches to the drink bottle holder mount points. The battery is secured to the bike – it cannot be removed without tools. 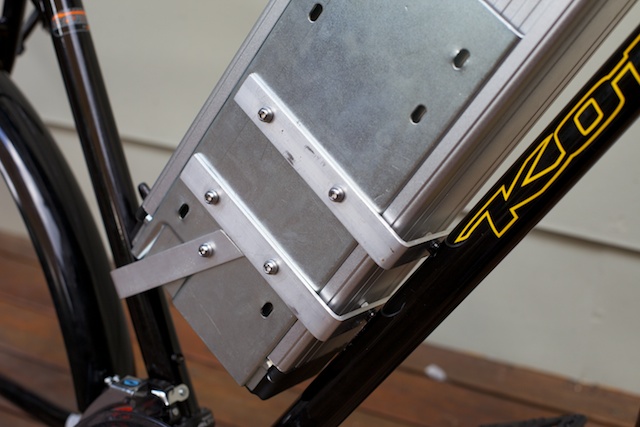 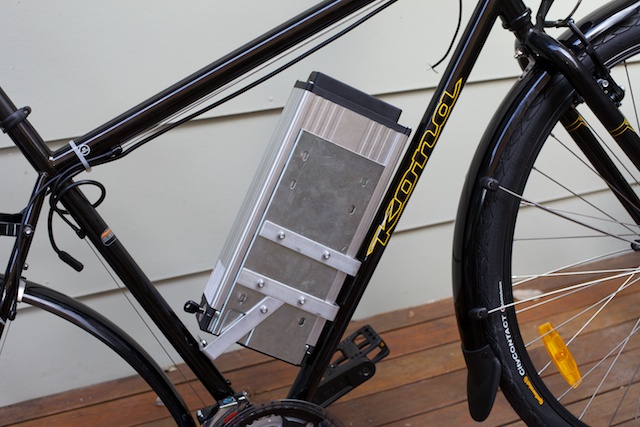 The wheel containing the hub motor cannot be quick release. It is also has cabling attached making removal more timely. You simply don’t want to be dealing with punctures on an electric bike so consider a combination of the following:

1. Use a tire puncture sealant goo in your tubes

Do I need to pedal my electric bike?

I pedal for two reasons a) it feels awkward not to and b) travelling on a push bike above 20km/hr without pedalling attracts attention which is generally unwanted.

Most importantly a reasonably powerful motor means that any pedalling you do is comparable always being on the flat or slight downhill run. It’s effortless.

Golden Motor have resellers in many countries and also sell direct online. My experience in dealing direct with them has been very positive. They have been both very responsive and helpful.

In Australia – none of the resellers that I can locate appear to be operating on sufficient scale to provide the same level of service as Golden Motor are able to provide in dealing directly with them – even allowing for language and distance.

Shipments from China to capital city in Australia have been consistently around 4 days from ordering.

Golden Motor have an incredibly amount of community support and some fantastic resellers who publish valuable resources online:

I first setup the bike around March 2012 and the review above was written shortly after. What follows is my experience 12 months on – some things have changed, I’ve learnt a bit and so some parts of this update super-seed the original review. 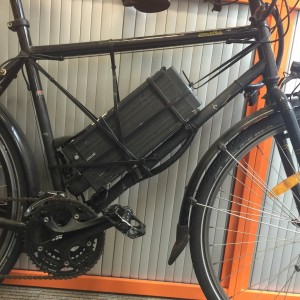 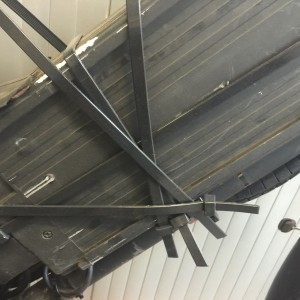